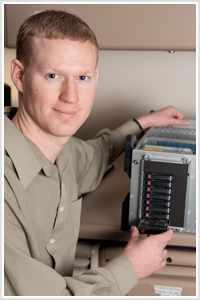 Jesse is the assistant IT director for Gamma HealthCare, Inc , where he helps to oversee and maintain the networking infrastructure. This includes sixteen branch offices, over four hundred long-term care facilities and physician clinics scattered across nine states.

He attended Iowa Central and holds an A.A.S. in Computer Networking Technology where his major areas of study included…

Other projects include independent IT consulting for…

An aviation enthusiast, Jesse enjoys providing freelance flight instruction. He sits on the airport advisory board for the city of Poplar Bluff and holds a commercial pilot certificate with an instrument rating as well as a flight instruction certificate and has 2000+ hours of flight time logged.